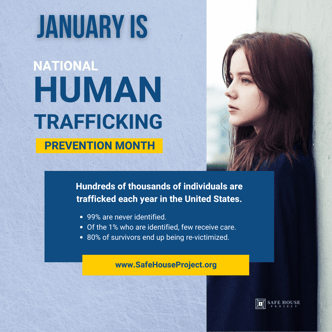 During this month, we celebrate the efforts of foreign governments, international organizations, anti-trafficking entities, law enforcement officials, survivor advocates, communities of faith, businesses, and private citizens all around the world to raise awareness about human trafficking. As we continue to raise awareness of this month, have you ever wondered how the month came about?

Starting in 1970 the Racketeer Influenced and Corrupt Organizations Act (RICO) was originally created to combat organized crime, but has been extended over the
course of years to prosecute perpetrators of human trafficking, specifically to
offenses involving commercial sex acts and sexual exploitation of minors.

2000- The Trafficking Victims Protection Act (TVPA) of 2000 enshrined the United States’ commitment to combating human trafficking domestically and internationally. Prohibits: (1) forced labor; (2) trafficking with respect to peonage, slavery, or involuntary servitude; and (3) sex trafficking of children or of others by force, fraud, or coercion. Sets penalties for violations, including life imprisonment.

2001 — (DOS TIP) Office to Monitor and Combat Trafficking in Persons
An agency created in 2001 under the Department of State to investigate and
create programs pertaining to human trafficking both domestically and
internationally. They present the Trafficking in Persons Report to Congress
every year.
2003-2005 — Trafficking Victims Protection Reauthorization Act of 2003 and 2005
This act refined the original TVPA act created in 2003, making human trafficking
crimes punishable under RICO (Racketeer Influenced and Corrupt Organization
Act), a predicate offense to the DOJ’s law of Obscenity which is the defined as 3
the distribution of obscene material not protected under the 1st amendment, in
partnership with the CEOS (The Child Exploitation Section) . This Act also 4
allows trafficking victims to “file lawsuits against their traffickers in federal
district court”. This act also mandates that the Attorney General submits an 5
annual report to Congress on the implementation of the TVPA

2008 — Child Soldiers Prevention Act of 2008
“The recruitment and use of children in armed conflict is broadly viewed as a
human rights problem, a form of trafficking in persons, among the worst forms of
child labor, and a war crime”. This bill is applicable to the United States under 9
collaboration with the United Nations.

2013 — Trafficking Victims Protection Reauthorization Act of 2013
The Director of the DOS TIP office, partnering with DOS, DOL and other
governmental officials to prevent the use of products produced using the labor of
trafficking victims.

2017 — The Trafficking Victims Protection Act of 2017
Provides additional funding to create more transparency of the government’s
anti-trafficking work. Requires the Attorney General to partner with the
Department of Health and Human Services to disseminate tools and suggested
practices for the screening of human trafficking victims.

This Reauthorization Act includes the Survivor’s Bill of Rights in States Act which
“encourages states to adopt the same protections for survivors of state sex crimes
that already exist at the federal level”.

2022 — International Trafficking Victims Protection Reauthorization Act of
2022
Sponsored by U.S. Senator Robert Menendez (D-NJ). Goal is to create a
multilateral approach to tackling the financial aspects of international trafficking.
The Secretary of the Treasury must work in conjunction with the Secretary of
State. Also expands prevention efforts in international development when the
U.S is involved in food security, economic development, education, health,
humanitarian assistance, democracy and governance.

On December 21st, the Senate bills for the TVPA S. 3946 & S. 3949 passed the Senate. On December 23rd, the House passed S. 3946 & S. 3949, which sent the TVPA onto the President for the final signature and was signed by President Biden on January 5th, 2023. Safe House Project is honored to work alongside members of Congress to pass critical legislation that supports initiatives to prosecute traffickers, protect victims, and prevent trafficking.